While often set aside as a frivolous hobby, Science Fiction is anything but. I’d go so far as to say it may be one of the smartest, most important art forms we have.

Now before you roll your eyes any further back in your head, let me share a few things with you about why I’m positive this is the case.

Myth:
Science Fiction, or simply sci-fi, is all just about aliens, action, adventures, and essentially fantasies of nerdy geeks that don’t have a social life.

The truth is that yes, sci-fi DOES often take place in far fetched locations such as other planets or outer space, there ARE aliens or mysterious creatures and robots. Often times action and adventure is present, but not always. But these stories are often far from any sort of fantasy. Quite the opposite actually.

I want you to check out just some of the “big names” in sci-fi. Books such as ‘Do Androids Dream Of Electric Sheep’ by Philip K Dick or the movie based off of it, Blade Runner. A sci-fi story that asks the biggest question we face, what does it mean to be human? Books such as ‘Dune’ by Frank Herbert tackle issues of religion, power, man’s control over ecology, and so much more. The Matrix asks the question of is reality real or are we all just in a simulation? And if it is just a simulation, would we really want to break free of it if we knew the struggle we would face?

I could go on and on, but you get the idea.

The brilliance of sci-fi as an art is that it has a truly unique ability to simultaneously entertain us and make us wrestle with topics we don’t normally come across in day to day life.

An art form that can wrap a question like “What does being human really mean?” into an entertaining story that hooks you with characters you love and hate, adventure, excitement, drama, sadness, and fear. The fact that such large questions are explored in story form is a nearly perfect system.

Through the voice of the characters on the page and in settings both otherworldly and familiar at the same time, we are able to feel a connection to the story while deeper in our minds the connection to the question and our own consideration of it, takes hold.

So many of the topics that sci-fi will bring to question would be very uncomfortable to consider and contemplate out of the blue with your friends or family. So being able to consider the questions through the eyes of a fictional character in a fictional world or timeline gives us enough of a buffer where we can freely let our mind explore the concepts presented.

A nearly perfect delivery system for an art form that carries some of the highest connection and impact for it’s audience.

I love looking at sci-fi art just as much as reading/watching the stories. A short time back I came across this image.

It was apparently a cover image for a magazine called Fantastic Stories of Imagination, back in the early 1960’s as seen here: 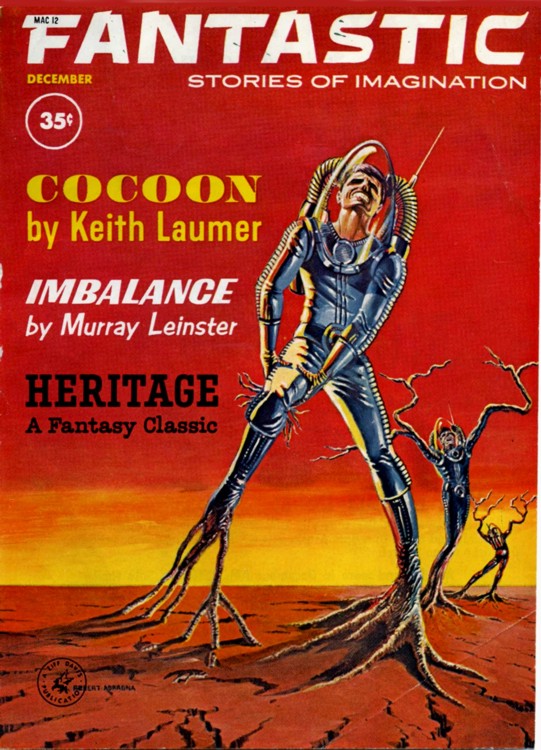 Later it was used as the cover for a book called Transformations : The Story of Science Fiction Magazines from 1950-1970.

The art really stuck with me. Making me want to know what is going on as these men are apparently being turned into some sort of tree on this strange planet. The agony and horror on the face of the man in front as he struggles to free himself, yet the gesture of the two men in the back further along their transformation seems to indicate a sense of them giving themselves over happily to the process.

It’s art that, again, appears straightforward but also sparks deeper questions in our mind as the viewer. At first glance we think, ok that’s crazy! People getting turned to trees?! Then as we look more, we see the emotion, and we begin to imagine ourselves in the position of these men. What would we do? How would we react?

When people view, read, listen, or otherwise interact with whatever I’m creating I want them to have that feeling of simultaneously being given enjoyment AND a sense of deeper questioning within themselves as they spend more time with it.

I want there to feel like there are elements of story for them to connect with and at the same time a mirror of sorts as they think about whatever questions the art is asking of them.

That’s a tall order, I know.

I doubt my work has anywhere near that impact at this point. But it’s what I’m striving for. Not to be a sci-fi artist, but to find a way to build that same kind of connection with anyone that takes time to soak it in.

But it’s THAT kind of connection that makes sci-fi one of the most important art forms of all time.

Added bonus
If you want to check out some fantastic science fiction short stories you really need to go check out and subscribe to Yesterday’s Sci-Fi from my good friend Adam.

He’s curating all sorts of amazing old short stories in an audio book format and delivering them to you via his amazing podcast. If you like sci-fi stories, you’ll love Yesterday’s Sci-Fi.

David (Usually Dave) Szweduik is a photographer, podcaster, and all around geek from the great state of Minnesota and can be found weekly on his podcast Adventures in Creativity. There you’ll find him having conversations fueled by curiosity around the amazing world of all things creativity.

With over 30 years of experience as a musician, writer, and photographer, David (Usually Dave) Szweduik shares insights that he’s learned and is still learning on his own Adventures in Creativity. The goal is to push you, as well as himself, to take action and give value as you unleash your own creativity monster! Did we mention he’s a bit of a geek?! The weekly episodes are a mix of solo short form monologues as well as longer form conversations with amazing people creating incredible work in all manner of creative genres. They are all designed to give you something new to consider on your creative journey, expand your creative horizons, introduce you to what he’s finding inspiring, or simply motivate you to keep at it, From photography to illustration and music to metalworking, if you’re a creative, welcome to the adventure!